See the Home Learning section  on the Main Menu for detail on home learning activities for your child.

​Welcome back to Term 4.

This term we are Scientists answering the question: “Why are more people becoming vegetarian?”.

We are also continuing with our ukulele lessons on a Thursday provided by Bristol Plays Music and we will be working towards a performance (with year 3), at the end of the term of  Go for Gold, a play based around the Olympics. Speaking parts have now been issued to those children who wanted a role; please help your children to learn their lines.

Our homework in Year 4 continues to be reading, spellings and times tables. We use activities in Purple Mash to support these. Please encourage your child to keep practising their times tables to improve their recall speed. Your child has access to TT-Rockstars which is a safe site for them to use to improve their recall speed. This becomes more important as we move towards June and the multiplication tables check. This is made up of 25 questions, each of which has to be answered within 6 seconds.

Even if your child is a Free Reader, reading at home is vital for a child’s development. Please try to hear your child read every day for 10 minutes and record this in their Reading Record.   The awarding of book prizes for the number of times they have read to an adult (and had their Record signed) is continuing into this term. .

In class we will be focussing on four I cans:

Dates for the Diary

Last week, the children had a fun but exhausting trip into Bristol city centre to attend an Anglo-Saxon workshop at M-Shed. We started by walking to Sea Mills train station where we caught a train to Temple Meads. Then it was a rather quick walk across Bristol to M-Shed, where we were greeted by the lovely staff and taken to our room. There we learnt about where the Anglo-Saxons came from and tried to identify what various artefacts were and what they were used for. We also had a session on the different types of clothes worn by Anglo-Saxons and discovered how they divided England up amongst the different kings. After an Anglo-Saxon story we were able to look at some of the other items in M-Shed, particularly looking for references to Sea Mills. Then, after lunch, it was slightly slower walk back to the Temple Meads and the train back to Sea Mills. We took the opportunity to look at where the Romans build their port before walking back to school.

We had a great day out and would like to say thank you to the Heather Cullimore at Severnside Railway Community Partnership who arranged for us to travel on the train for free and to the parents who were able to help us on this trip.

The class have been very busy this term answering our Enquiry, “Why do we live here?”. Please ask your children what they have learned about the reasons why people settled in the places they did and why the Ancient Sumerians were so amazing.

They have also finished their swimming lessons and were presented with their award cards in our assembly. This also gave the class a change to share the work they have been doing this year and to give a recorder recital of Mary had a little lamb.

We have had a couple of visitors this term. The first was Helen from The Dogs Trust, who came to talk to us about why some dogs might be unkind and how, sometimes, it is because of something we may have done to cause upset. The class enjoyed discussing the different scenarios and acting them out. The second visitor was not so welcome. A Naughty Elf snuck into class and caused some disruption in the book corner. He was suitably dealt with!

” It was my first time going to a film. It was very good.”

“It was so funny I nearly lost my voice laughing!”

These are just a few of the reactions to our trip to see The Addams Family this week. The children had a wonderful time and were amazing ambassadors for Sea Mills School, both on the buses to and from the cinema and at the venue. Year 4 would like to say a big thank you to those parents who made additional contributions towards the trip.

Enquiry: What is the difference between sound and noise?

To finish our enquiry the class were challenged to make a musical instrument that could play two notes.  Here are some of the results:

We created some paintings in the style of Australian Aboriginals and read some of their Dreamtime Stories:

As part of our Diversity month studies, we learnt about the United Nations and the things it does. We looked at UNICEF and The Convention on the Rights of a Child. Here are some of the pictures we painted to represent some of these rights: 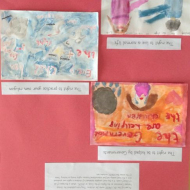 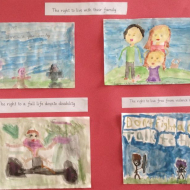 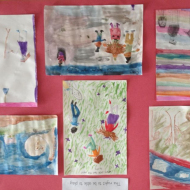 It has been a very busy term and the whole class have worked hard. Here are a few highlights:
We were fortunate to have a class visit from Fizz-Pop Science. In the session Elsa learnt how to pick up a plate without touching it, William discovered how hard life would be if we had giant hands, Thomas and Lily tried to turn around without moving their exotic head-dress and Blake found out how to remove a table-cloth without clearing the table first. Finally, Ziggy was made to float (wearing suitable safety clothing!)

As part of the whole school Enquiry, Year 4 focussed on the two questions What makes Sea Mills Special? and What does a good learner look like?  We recorded our findings into a video clip.

We have now started our first Year 4 Enquiry – What is the difference between sound and noise?

We have tried to ‘tune’ glasses of water to create a musical scale and have found out how different wind instruments make different sounds, thanks to a visit from Fiona, who teaches flute in school. Next we will investigate how other instruments make sound and then attempt to build our own.